Transitioning to Success and Winning Awards 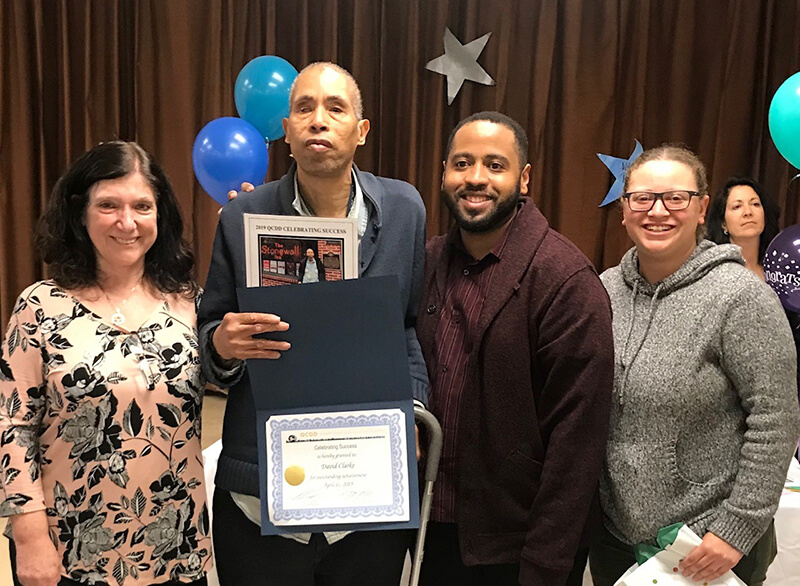 April 16 was a day for celebration, as nine of the people that YAI supports were recognized by the Queens Council on Developmental Disabilities for their tremendous accomplishments.

“On this night we stop and recognize the accomplishments of individuals with developmental disabilities and their support team,” she said. “The result is difficult to describe. We inspire each other. We experience humility and pride simultaneously. We smile a lot.”

After opening remarks, each recipient was called to the front of the room and awarded a "Certificate of Outstanding Achievement” amid cheers from the audience.

We are so proud to announce the following certificate recipients:

Despite his declining eyesight, John Jackson, a resident at YAI’s 19th Road residence, hasn’t missed a step on his journey to a more independent life. In collaboration with VISIONS - Services for the Blind and Visually Impaired, John and his YAI support team have worked hard to make sure that his habits and environment can keep up with his drive to succeed.

Stress is tough on everyone, but John Gallagher stands out for the strides he’s made to build better coping skills. Thanks to the hard work of John and his support team, his friendly personality shines when interacting with staff and community members, alike.

In 2017, Robert Lamb made a major life decision to move out of his family home and into YAI’s Forest Hills residence. So much change at once was challenging for Robert, but he quickly mastered the skills he needed to succeed. In addition to being helpful around his new home, Robert’s dry wit and calm demeanor bring joy to his fellow housemates and support staff.

Medical appointments can be nerve-wracking, but Miriam Limsky of YAI’s Howard Beach residence has found a way to make sure that her health doesn’t suffer as a result. Working alongside the program nurse and her support team, Miriam has learned to manage anxiety surrounding medical appointments by proactively researching medical tests and procedures so that she’s fully prepared. Miriam has since become her own best advocate for medical care.

Driven by the need to create a safe space for people YAI serves who identify as LGBTQ, David Clarke founded YAI's "Free to Be" division. By creating a group for others like him, David's innate qualities as a leader have blossomed and he has become an active member in the broader LGBTQ community going, to socials, mixers, and sharing his story with others.

Pavel Muga, who attends YAI's Bayside Center for Specialized Therapy, stands out for his commitment to a healthier, more active life. Working with his nutritionist and psychotherapist, Pavel lost more than 30 pounds and developed a greater understanding of the importance of good nutrition and exercise.

When it comes to building meaningful connections with others, Queenisha Holder, who receives support from YAI, has come a long way. After joining a positive psychology group, which she named the "Be Myself Group,” Queenisha quickly established herself as an active member, leading discussions, expressing herself openly, and developing lasting friendships.

Despite significant health challenges that have affected her social and work life, Wendy Alpert refuses to be held back. In addition to the support she receives from YAI, Wendy’s positive mindset has enabled her to flourish and inspire those around her. In her time at YAI’s day program, Wendy has received awards for her volunteer work at a local nursing home.

With her ready smile and upbeat personality, Tanzanika Ellerbee was a perfect fit for her role as a YAI Administrative Assistant. These days, Tanzanika, who participates in YAI’s Supportive Employment program, has much to celebrate. Not only did she accomplish her goal of gaining and maintaining employment, but she was also recently married.