Augmentative Communication Serves as Gateway to Students With Brain-Based Disorders 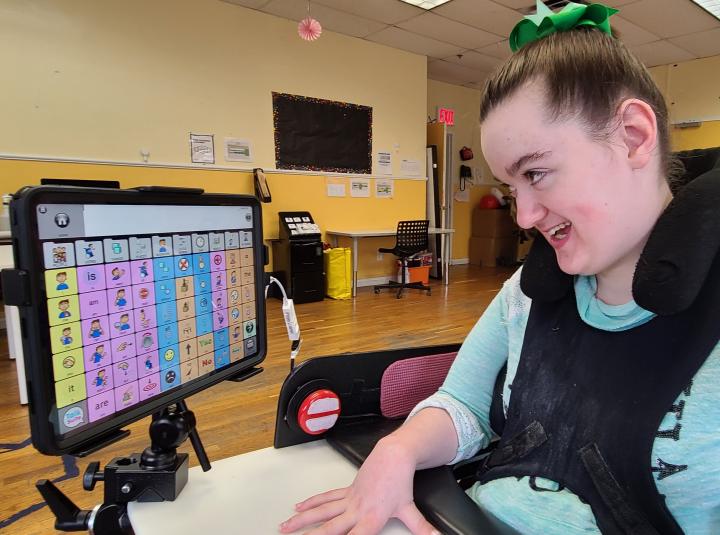 The 19-year-old, who doesn’t use words to communicate, is one of 80 iHOPE students, all of whom use some form of assisted communication technology. Recently, Sellman has even started to use her Augmentative and Alternative Communication (AAC) device to advocate for herself in ways no one had previously imagined possible.

The tremendous amount of memory power and mental mapping that comes with learning the workings of an AAC device and its design make it comparable to learning a new language. With enough time and the right system, AAC devices aim to bring a community that often is seen as passive observers into the conversation. It’s the same philosophy that guides iHOPE – a belief that every student has a voice and needs a means to communicate.

“I heard an awesome mother once say, ‘true communication is when the kid tells the adult something the adult didn’t know.’ If you give them the right communication device with enough words on it, then they do that and that’s exactly what Amelia did,” said iHOPE Director of Assistive Technology and Literacy Specialist, Gretchen Hanser. 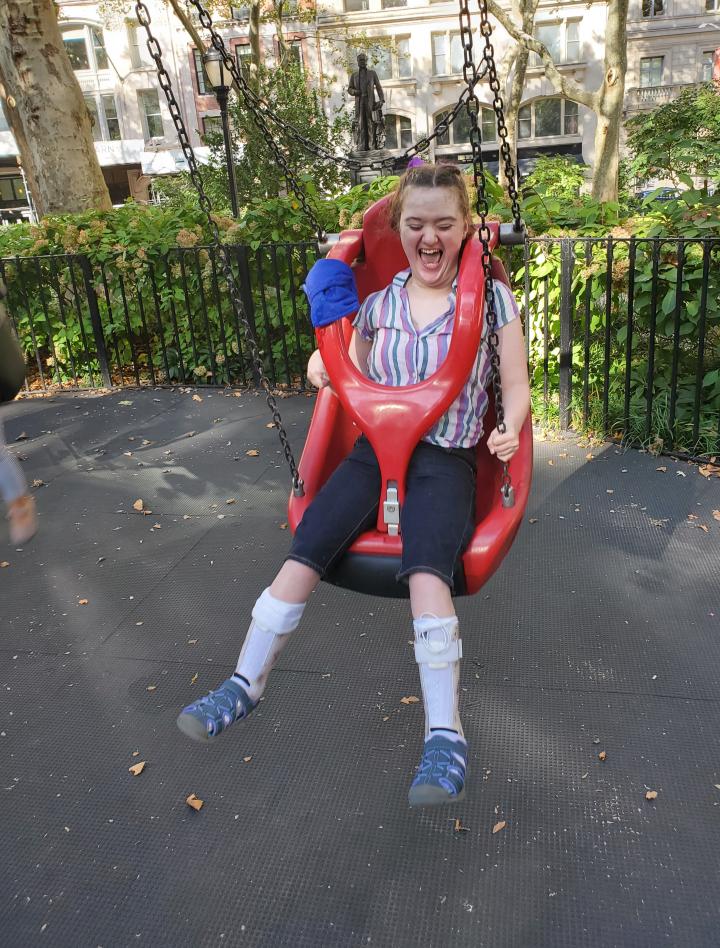 Sellman has very limited mobility and uses a wheelchair to get around. Furthermore, her poor vision requires her to rely on her auditory skills to interact with others. In the past, her teachers had used multiple communication devices with little success. It wasn’t until 2018 when they found one that fit her needs. Talk Suite is an app that Sellman uses on her iPad. The app was developed by Richard Ellenson, a former advertising executive, who created it for his five-year-old son Thomas, who has cerebral palsy.

“The device Tom was using was so slow and cumbersome and I wasn’t thrilled with its approach to language,” Ellenson said. “It is incredibly painful for parents to know their kids are vibrant and fun and caring, but the world sees them as dull and uninteresting.”

Ellenson’s frustrations led him to develop Talk Suite. Taking two years to research while meeting experts in the field, he created the program with one main thing in mind: building human connections and incorporating emotion – a component he noticed was lacking in available devices.

That was 17 years ago. Today Talk Suite has been reconfigured to work as a scanner, a function that supports students like Sellman, who cannot access the app with her fingers. Sellman uses the back of her hands to tap “switches,” which look like buzzer buttons, Velcroed to the insides of her wheelchair lap desk. The app also talks through her movements so she knows where she is on the interface. A male voice assists with the scanning, and a female voice lets her know she is in the topic folder she has selected.

“Talk Suite and the organization of language is ideal for someone like Amelia, who depends on her auditory system to remember and use language,” said Megan Fucci Wenzel, iHOPE’s Director of Speech Language & Hearing. “Talk Suite has provided Amelia with a voice, but also has provided us a window into her thoughts, humor, and abilities.”

Sellman used that voice to advocate for herself when dealing with a toothache. She used Talk Suite to choose the word “tooth” during one of her sessions with her teachers. They knew she had an upcoming doctor’s appointment to check out a possible neck pain she was having, so it perplexed them when she picked tooth instead. Nevertheless, they followed Sellman’s lead and a trip to the dentist confirmed she had an impacted wisdom tooth.

“I’ve delighted in seeing so many other people now understanding and appreciating Amelia and her contributions. Amelia’s personality, humor, kindness, intellectual curiosity—including her love for reading and writing now with her device...have all developed and matured so beautifully,” said Sellman’s mother, Marcia. “I am so thankful for everyone’s expertise in helping Amelia to thrive.”

AAC devices don’t come cheap. The high-tech gadgets can range from anywhere between $500 to $17,000. iHOPE funds assisted technology mostly through their annual Art Speaks fundraiser. But with the ever-changing landscape of technology, the school continues to have a great need. “Just a little bit of technology opens up the world for these students,” said Fucci Wenzel.

“Often people look at these kids and go, ‘oh no they are not ready for this technology yet,’ that’s been the history with this population, so the kids get stuck and they never learn,” Hanser explained. “They weren’t able to demonstrate that they know how to use a communication device so people didn’t give them one,” she continued. “When what we should be doing is giving them a device so they can learn how to use it...with enough time, the kids will make progress.”

Job Seekers With I/DD Hone Their Skills for the Workforce

Basic Training: How the NYPD Can Understand People on the Spectrum

A Watershed Moment in Supported Decision-Making

Recognizing the Sexual Rights of People With I/DD