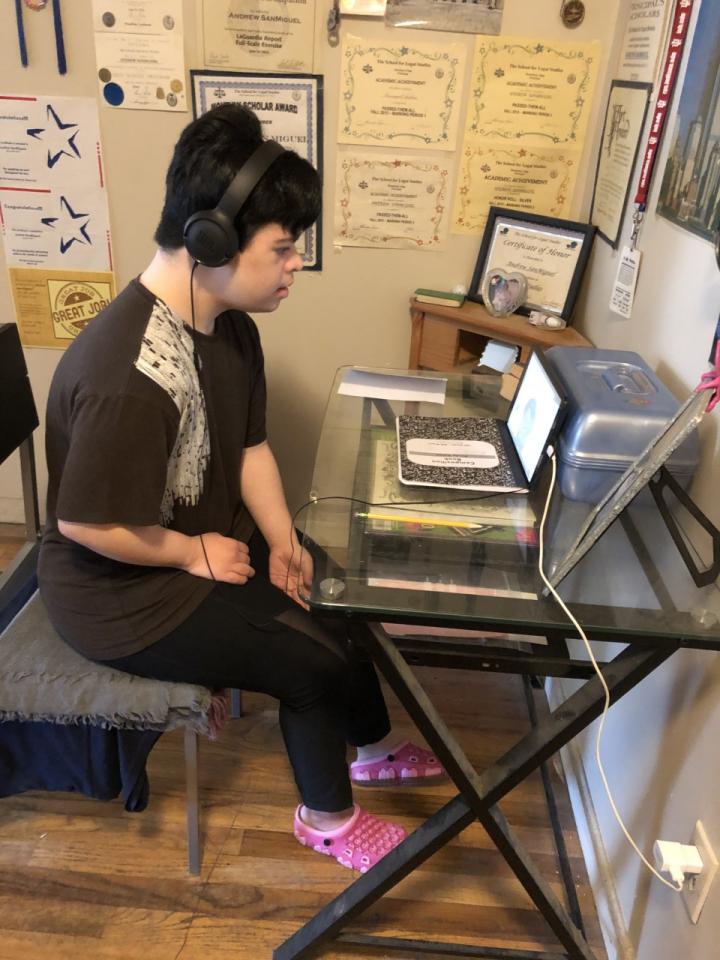 For months we’ve marveled at the successes—and suffered through the failures—of in-person activities translated to a virtual format. At YAI, the virtual Central Park Challenge toppled fundraising expectations without a single footstep in the park itself. But what some event producers and political campaigns have managed to do beautifully has tripped up universities, religious organizations, and dramatists. The question: how can we duplicate a genuinely human experience in a digital sphere?

Some at YAI have the answer. And it’s a good one.

John Chatman is a Direct Support Professional at YAI’s Brooklyn Heights Day Hab (BHDH). Like other day programs in New York State, BHDH was mandated to close its doors on March 18. Pandemic conditions changed over the next four months and in late July, the State’s Office for People with Developmental Disabilities allowed some day habs to re-open for some participants. Because participation was still restricted, Chatman and his colleagues devised an immersive virtual Day Hab experience. Together with program members, their families, and hardworking DSPs who were working from home, BHDH built a model day hab program that meets multiple objectives and sustains the goals of personal growth that make day programs run.

“One of the major concerns we had was if we could hold the attention of PWS for two hours, but adding services, virtual sightseeing tours, and Topics of the Day that covered things from politics, celebrities, current events, you name it, they helped provide enough structure,” said Chatman. “It’s all dynamic and as interactive as it can be. Some things may go over their head, but a lot of it leads to further discussion and develops their thought processes.”

The key to the virtual program, just like the traditional day hab, is a clear structure flexible enough to give participants opportunities to take part in programming and activity development. Activities include daily COVID-19 updates, interactive games, and a review of travel and pandemic safety protocol. Each two-hour session begins with a brief breathing exercise to help the 12 to 20 participants focus and maintain calm and then transitions into a “homeroom,” where they greet one another and engage in casual conversation as others join the meeting. In the beginning, many participants had seen no one except for their family members, so this became a main focal point for them.

“Initially, we saw that people, both those we support and their caretakers, were falling out of their routines. It had a lot to do with them focusing the attention on the people we support,” said Paul Felten, DSP at BHDH. “They didn’t realize this programming could provide relief, but they eventually saw it as an escape from the pandemic. Parents realized their child would be occupied for a couple of hours and they could take a much-needed break.”

BHDH incorporated many of its primary programming goals into the virtual experience, focusing on employment training for many of its participants. As employment in general has shifted, Felten and Chatman used the opportunity to finesse communication skills. “We don’t know if Zoom etiquette and other techniques we have focused on will be applicable post-pandemic, but people have shown marked progress,” Felten said.

In addition to providing opportunities for continued development despite the restrictions, the sessions have provided relief and comfort to participants’ families. Numerous family members have reached out to express thanks and describe how vital the sessions have been to re-establishing routine and adding excitement to homebound days. The virtual experience has led to unexpected increases in sociability, where normally shy participants have felt empowered through Zoom to become more assertive in their communication style, Chatman said.

“They initiate conversation, and now they’re looking into a camera, providing consistent eye contact, and asking relevant questions,” Chatman explained. “We see a lot more participation. Many are really thriving in this new experience. We do a color of the day. Many of the people we support end up wearing that color or represent it somewhere in their frame.”

As signs of normalcy have started to trickle back into life for many neurotypical people in the New York metropolitan area, Felten is cautious of how the I/DD population should react.

“All of the predictions I’ve made have been wrong so far, but if the social distancing protocols do go on for a significant amount of time, I can see the virtual Day Hab program incorporating more staff,” Felten said. “There are a lot of people who are waiting for programs to open. But it becomes the only option for an indefinite period and that is not subject to change anytime soon.”

BHDH is looking forward to a time at which staff and attendees can be together in one program once again, volunteering at sites and going out to engage actively with the city. In the meantime, Zoom meetings continue to give the people we support a vital social and educational outlet - a lifeline to the world and to each other.