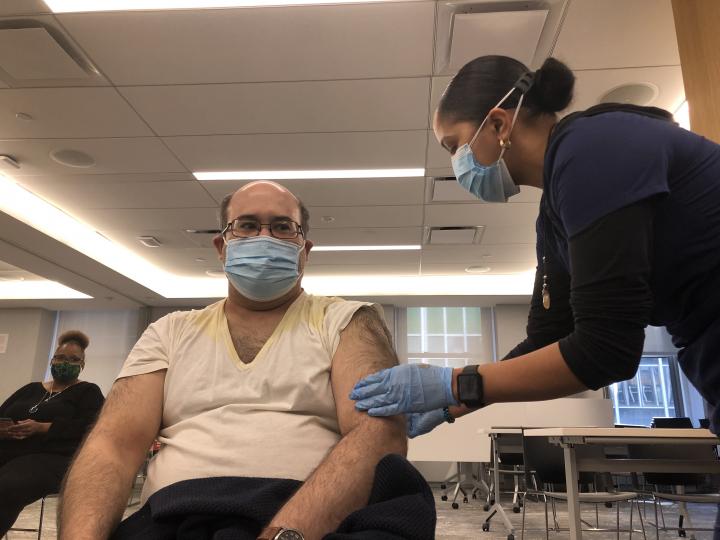 As soon as the Pfizer and Moderna COVID-19 vaccines were approved in December, many in the disabilities community saw a bright light at the end of the tunnel. But Hope Levy, Executive Director of Premier HealthCare, YAI’s clinical affiliate, made it a personal crusade to get priority access for New Yorkers with intellectual and developmental disabilities (I/DD).

Beginning in December, Levy lobbied hard with State and City officials for vaccine access. Because she knew first-hand that people with I/DD were disproportionately affected by the virus, Levy had no time to lose.

“Early in the pandemic, we saw so much illness and death,” said Levy. “Because Premier is a specialty provider this community really relies on, we needed to do our part to protect both our patients and our healthcare workers.”

A November white paper from FAIR Health showed that people with I/DD are three times more likely to die from COVID-19 than the neurotypical population; the only factor with greater risk is lung cancer. And because many with I/DD live in group settings where they must interact with staff at close range, complicating social distance and quarantine.

While waiting for the State and City to determine their priorities, YAI and Premier entered into conversations with Mayor de Blasio’s office, Governor Cuomo’s office, and City Council Health Committee Chair Mark Levine, who was outspoken about the vulnerability of New Yorkers with I/DD. Levy pressed them to interpret the CDC “long-term congregate care” guidelines to include people with I/DD.

Levy’s persistence paid off when she learned that people with I/DD living in supported residences would be included in phase 1b of the rollout.

But the challenges kept coming.

Her next hurdle was advocating for Premier to become a designated vaccine provider. Together with Margaret Puddington, long-time parent advocate, and Peter Taback, YAI’s Chief Engagement and External Affairs Officer, Levy testified at a special City Council hearing about the newly approved vaccines. A few hours later, after calls from Chair Levine and the Mayor’s office, the City’s Department of Health and Mental Hygiene (DOHMH) designated Premier HealthCare as a vaccine provider. The first doses were on their way to Premier the next day.

Despite these wins, the process has not always gone according to plan. Bureaucracy and familiar turf wars between Albany and City Hall often left Premier without needed vaccine doses. Some appointments had to be postponed until adequate supplies arrived. But today, of those who granted consent, more than 90% of people who live in YAI’s New York City residences have been vaccinated along with residents of peer I/DD provider supported housing.

Three months into the national rollout, the landscape changes regularly with new rules Premier must follow and new opportunities to hit the phones. When the State began allowing people with I/DD outside of congregate care settings to receive the vaccine, it did not make any plans to accommodate them at large vaccination sites. So Levy went back to work, reminding elected officials that only specialty clinics have the expertise needed to vaccinate many in this population.

“Premier served as the conscience of the community and did not keep quiet,” said George Contos, YAI’s CEO. “Not about prioritizing people with I/DD, not about the special risks to families and staff, and not about needing time to administer a shot to a population that may need desensitization, staffing, and more compassion than commercial pharmacies can provide. But we made headway with State and City politicians who don’t always understand the special circumstances of folks with I/DD.”

Premier is now alert to the effort required to secure enough doses to vaccinate its existing Premier patients—nearly 9,000 of them—and others.

“We learned to navigate and coordinate a two-dose vaccine and abide by the State’s ongoing reporting requirements and regulations,” Levy said. “This has not been easy, but I never doubted that it was worth a few sleepless nights and panicked phone calls.”