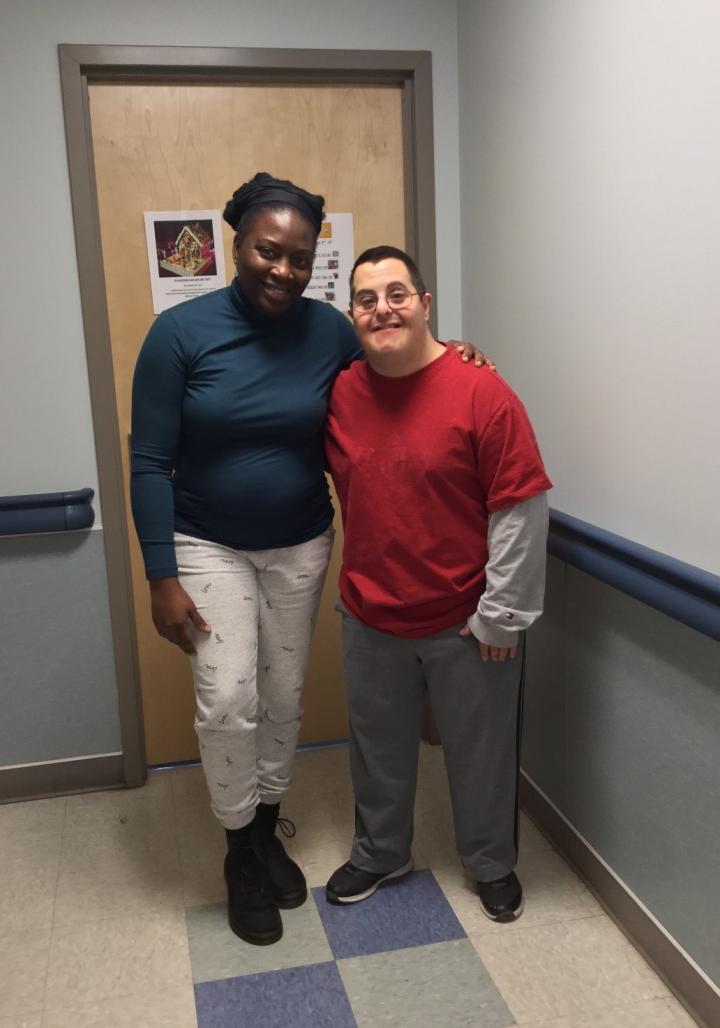 On September 14, Kizzy Byfield completed YAI’s CPR and First Aid training. Just 13 days later, on September 27, she used those skills to save the life of a man who attends the agency’s Fulton Street Day Habilitation program in Farmingdale, New York.

During a lunch outing to Wendy’s, Thomas Panagos was eating chicken nuggets and chatting with his friends when he fell silent and grabbed his throat. Byfield, one of the staff who was supporting Panagos and the group that day, instantly realized what was happening.

“When I looked at him, I saw he was choking,” she said. “So, I pulled him out of his chair and did the Heimlich maneuver. It took me three or four tries, but I finally got the chicken nugget out of him.”

Afterward, Byfield called 911 and the emergency responders assessed that, thanks to her immediate response, Panagos had made it through the potentially deadly incident unscathed.

According to the National Safety Council, more than 5,000 Americans die from choking every year. In 2018, researchers from Syracuse University’s Sociology and Aging Studies Institute surveyed national mortality data from 2012 to 2016. Their research revealed that choking is the leading cause of external, accidental death among people with intellectual and developmental disabilities (I/DD) and is responsible for one in every 20 deaths overall.

“Many people with I/DD have physical issues with swallowing or eating too fast, so they’re at high risk for choking,” said Ortiz, who oversees YAI’s CPR and First Aid training and certification program. “Because of this, we make sure that all support staff receive training to respond with CPR and first aid immediately. By training our staff, we’ve been extremely successful in preventing death or injury from choking. Even if the person seems fine afterward, we don’t take any chances. We always make sure to follow up with emergency response and monitoring to make sure there is no lasting damage.”

Once a person begins to choke, they have less than 7 minutes before irreversible brain damage or death. But with rapid intervention from someone who has been trained to provide basic CPR and First Aid, most major complications and deaths can be prevented.

In 2005, YAI became an American Heart Association-certified training center for CPR and First Aid. Every year, the agency teaches 150 CPR, First Aid, and basic life support to around 1,200 employees. Throughout the agency, there are more than 60 CPR and First Aid instructors, including the one who taught Byfield.

“When I first heard about Kizzy, I had no idea if she’d learned CPR and how to do the Heimlich from YAI or somewhere else,” Oritz said. “I was so excited when I found out that the instructor who taught her, Latasha Royal, was one of our own. Thanks to her, Kizzy responded perfectly."

Panagos said that, despite the incident, he feels as good as ever.

“I was scared but I’m ok now,” he said. “I still like Wendy’s chicken nuggets. I like Kizzy, too. I’m glad she helped me — she’s always helps me with things. I feel safe now.”

Despite her lifesaving maneuver, Byfield said that she doesn’t think of herself as a hero.

“I didn’t even think twice about it,” she said. “I just knew it was something I had to do.”