YAI Leadership Reflects on 30 Years of the ADA

Some say the lives of people with disabilities changed forever when President George H.W. Bush signed the American with Disabilities Act on July 26, 1990. Others, including several who have built careers at YAI that span decades, feel that this federal legislation, while groundbreaking, can be best seen as the first step of a still-unfinished journey.

To understand the impact of the 30-year-old law, it’s worth glancing backwards to the years before 1990 when disability rights were mostly a matter of protection for federal employees and a handful of Supreme Court cases that established what qualifies as a disability. In many parts of the United States, people with intellectual and developmental disabilities (I/DD) were institutionalized, which meant opportunities for employment, social engagement, and self-reliance were severely limited.

Many at YAI, including Elizabeth Annarella, YAI Deputy Regional Director and an employee since 1977, say the ADA opened doors, both literally and figuratively. By mandating access, the ADA slowly eliminated the separate lane for people with both developmental and physical disabilities, following in the steps of agencies like YAI which began answering the call for deinstitutionalization by integrating people living in state-supported institutions as early as the 1970s.

“The ADA helped create a sense of equality,” Annarella said. “Watching as wheelchair ramps and Braille elevator panels became standard empowered people with disabilities who had been marginalized. It created a sense of pride for people and their families, Accessible design reaffirmed their civil rights.” 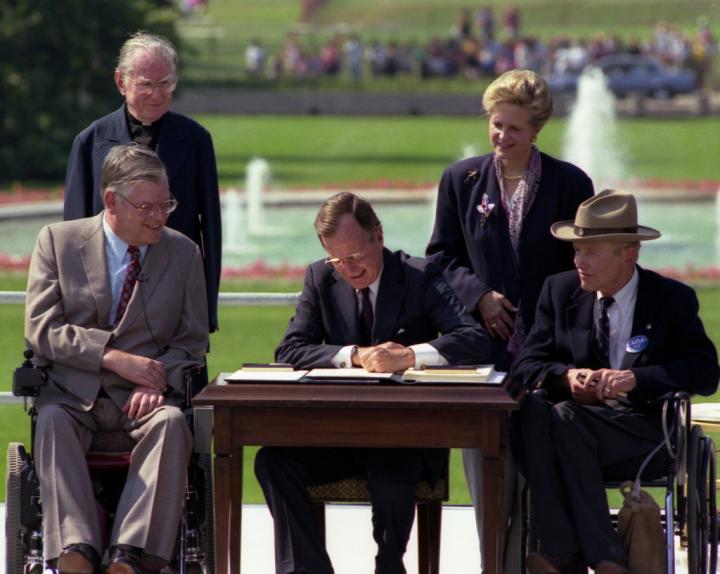 But Annarella, who also works in YAI’s Employment Program, pointed out that the ADA has done little to stimulate economic opportunity. When the ADA was signed into law, 50 percent of people with disabilities were employed. Since 1990, that figure has fallen, plummeting to nearly 20 percent in 2014, the most recent year data was available. Annarella explains that despite relative success with supported employment in New York State, most state governments do not support such programs adequately to generate significant employment.

“At first, companies realized they couldn’t discriminate against people with disabilities, and this made many of the issues for the disability community a priority,” Annarella said. “But, when we reflect on how the economy was playing out in the ‘70s and ‘80s, most states were struggling with deinstitutionalization and caring for the community effectively. The ADA was a great starting point, but it required states to carry the momentum forward. New York State had a head start and  created relevant supplemental policies to aid groups like ours in securing employment.”

One thing the ADA did do, according to Marianne Ardito, Regional Director of Community and Family Services, was bring public acknowledgement of the field of I/DD support. “The ADA reaffirmed the work YAI had dedicated itself to,” she said. “There were things that we were already promoting: the right to vote, to be sexual beings, to get married. The ADA affirmed these as worthwhile advocacy efforts. It showed the rest of America that these are the rights of people in the disability community, too.”

For Ardito, the ADA created places where people with disabilities weren’t invisible but took center stage.

“YAI’s work had always been person-centered but after the ADA, there were new opportunities for representation, including a theatre group in Brooklyn where people would be able to see excellent performances from people we supported,” Ardito said. “You see people with disabilities, and you see them as real people. That’s powerful.”

Ismael Nunez, one of YAI’s Self Advocates, agreed with Ardito.

“The ADA put us on the map. For many years, the developmental disabilities community was ignored. We were invisible,” Nunez said. “Even today, many people in society still don’t understand what disability means. The ADA shows others that people with disabilities can do things. We can run things. If you let us. And that’s important.”

The ADA’s 30-year anniversary was also celebrated by Khadejah Roulston, Healthcare Specialist, who has seen parallels between the ADA and the Black Lives Matter (BLM) movement, especially when it comes to fighting for a higher quality of life.

“In the time I’ve been working with the I/DD community, I’ve seen a lack of visibility and awareness outside that reminds me of what we do in the BLM movement. It comes down to wanting to be seen and heard. I just hope the rest of the world can catch up and start to lead similar sorts of change for the disabilities community,” Roulston said. “Different industries need to include more people with disabilities, many of whom are as capable as neurotypical candidates. The more this happens, the more welcoming society will be toward the I/DD community, making them feel less like pariahs.”

This is what keeps Ismael Nunez coming back to YAI after all these years. According to him, the future implications of the ADA must be person-centered, emphasizing leadership development, healthcare access, removal of stigma, and revamping governmental policies that limit how people in the I/DD community can thrive.

Even considering a happy anniversary, in 2020, countless issues, including accountability, housing, awareness, education, and discrimination remain major problems for people with disabilities. The changes Nunez has witnessed have been gradual. But he continues his advocacy and asks allies to fight for inclusivity within the I/DD community.

“We don't want to be treated as consumers," Nunez said. "Just people."