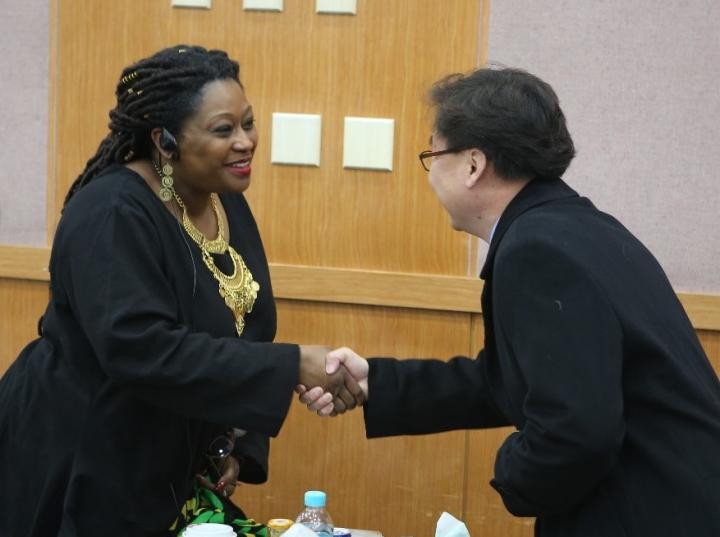 The week before Thanksgiving, Connie Senior, YAI’s Assistant Coordinator of Sex Education, traveled to South Korea to help families, researchers, and direct support staff learn how to best support people with intellectual and developmental disabilities (I/DD) as they navigate their sexuality. Hosted by Seoul-based I/DD services provider Gibbun Woori, more than 130 people attended the two-day conference during which Senior covered everything from sexual development and expression to consent and sexual rights.

The training exemplifies the Korean government’s efforts to increase person-centered supports for people with I/DD throughout the country as well as YAI’s expanding international reach.

“In Korea, sex isn’t openly talked about,” Senior said. “Going in, I knew I needed to balance respecting their culture with being frank about sexuality and the sexual rights of people with I/DD.”

According to South Korea’s Ministry of Health and Welfare, approximately 226,000 Koreans live with some form of I/DD. Of these, 82.4 percent are supported almost exclusively by their families, contributing to what many in the nation have called a crisis of care.

In 2018, South Korean President Moon Jae-In announced a nationwide initiative to provide health care, education, and social services to people with I/DD. The goal of Korea’s Comprehensive Plan for Lifelong Care for People with Developmental Disabilities was “to reduce parental pressure, to promote social interventions, and enhance community participation in order to create a welfare society in harmony.”

“Most people with I/DD live at home with families who may not think of them as having independent rights,” Senior said. “Often, as in so many places, the mentality is: ‘I’m the parent, my child lives with me, so I make the decisions until the day they die.’”

Senior added that, in Korea, I/DD agencies can lose funding if the family doesn’t approve of what’s being taught, even if the person with I/DD is an adult. This stands in contrast to the United States where parents are not legally responsible for their adult children with I/DD and, unless they obtain legal guardianship, cannot dictate how they choose to live or learn.

Cultural and legal differences aside, Senior said that one constant tends to hold true across cultures.

“Whether Korean or American, sexuality is a sensitive area for families, so I spoke of sexuality in a biological rather than cultural sense.” she said. “I wanted people to feel safe enough to ask questions while emphasizing that all people are sexual beings who have the right to exercise this biological need as long as they don’t harm or violate the consent of others.”

“In Korean culture, it’s rude to interrupt a presentation with questions, so I asked everyone to write theirs on notecards,” she said. “By the end of the first day, there were 100 questions. So, on the second day, I started the class by inviting others to speak first. People asked questions for two hours — it was incredible how engaged they were.”

According to Johanna Berglein, YAI’s International Affairs Manager, while this was the first in-depth sexuality training YAI led outside the United States, the agency has long shared knowledge through conferences and I/DD support consultations globally.

“YAI has deep expertise because, since the 1970s, we’ve had the resources to implement all these person-centered practices,” said Berglein, who organized Senior’s training with Gibbun Woori. “We want to share these with countries and organizations who haven’t been able to develop their own curricula and policies. We’re also looking into online training platforms so we can work with those who may not have the resources to fly us in.”

Aside from cost considerations, Berglein said that YAI must also adapt to existing cultural practices.

“On the global level, we talk about the I/DD community’s rights in a way that represents where we should be,” she said. “In reality, we’re all somewhere on that continuum and no one can claim to have it fully figured out. YAI’s position is to evaluate where these countries or providers are currently and then help them get closer to where they want to be.”

Before Senior left Korea, she said the she saw signs that the cultural needle had already begun to shift.

Senior added that the exchange stuck with her long after she boarded her flight back to New York.

“So often, people see a deficit in cognition and forget those people have needs like everyone else,” she said. “We must work with people with I/DD so they don’t become perpetrators or victims. We all need to love and be loved, and if we don’t learn to feel good about ourselves, we’ll search for that acceptance and attention wherever we can get it. I want to change the way people look at sexuality among people with I/DD and empower those on the right path to keep going, no matter the challenges they face.”