What Do We Mean When We Say 'Community?'

Over the course of the last several decades, we've seen tremendous change in the developmental disability service-provision system. Between 1960 and 2010, 195 large, state-run institutions were closed, bringing with their closure the promise of better lives in the community for their former residents. The expansion of supported employment services between the mid-1980s and 1990s showed that people with intellectual and developmental disabilities could not only live in the community, but that we could work there too if given the right supports.

Today, we are witnessing a fundamentally different developmental disability service-provision system than that which ruled the day in the mid-part of the 20th century. Twenty-two years after the passage of the Americans with Disabilities Act, we as a society are moving to a reality with fundamentally different expectations for our community. To quote Tom Perez, the Obama Administration's Assistant Attorney General for Civil Rights, "Civil Rights [in the 21st century] ... means working to create services, programs and public facilities that are accessible to people with disabilities, recognizing that they have a vast contribution to make to our society and our communities that can only be maximized if they have equal access. It means recognizing that segregating people with disabilities in institutions is every bit as bad and illegal as segregating children of color in inferior schools." 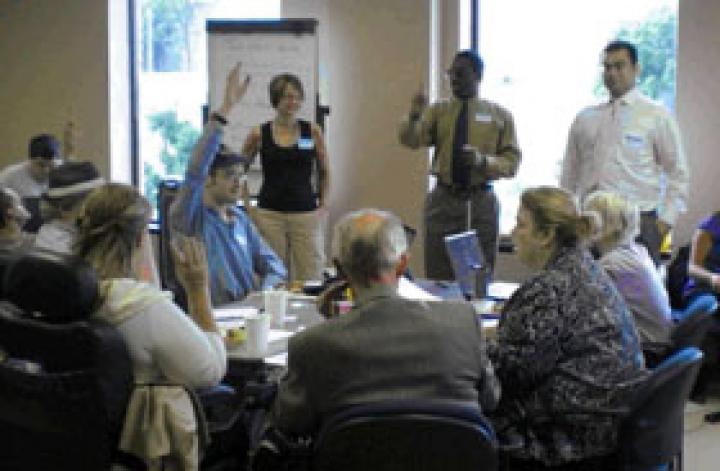 These are powerful moral statements -- but it makes sense for us to take a few moments to think about how we got here and where we still need to go when we talk about these issues. The history of the disability rights progress of the last several decades is not one of undisputed, unified steps forward or technocratic tinkering at the margins of the status quo. It is a history of attack, of struggle and disputes over the very meaning of disability and society's appropriate response to it. It is a history of struggle, and titanic contests where people with disabilities, our family members and the professionals who provide services to us found ourselves at odds just as often as we fought side by side. Most importantly, it is a history which is ongoing -- the disability civil rights movement is by no means over, and the status quo today is just as much in need of change as it was in decades past.

Some of you may wonder why I chose this particular forum to talk about these things -- a blog on the website of a prominent service-provider organization. After all, the Autistic Self Advocacy Network has a brand new web page that features plenty of content by and for the Autistic self-advocate community. The answer can be found by looking to the next step in the disability civil rights struggle I described above. In the age of willowbrook and the large, state-run institution, the litmus test of whether a provider agency was good or bad was simple -- did it or did it not support institutional closure? Today, with the work of de-institutionalization still ongoing but entering a new phase, the answer has become more complicated.

Some of the same provider groups that helped close institutions are today segregating people with disabilities away from the community in sheltered workshops, perpetrating the grave injustice of sub minimum wage employment. Furthermore, as we put an end to the large, state-run facilities of yesterday (a process that is by no means over, it should be noted), it is important for us to pay attention to doing away with smaller institutional settings as well, some of which are now masquerading as within the community. Last year, ASAN released with two other national self-advocacy organizations a joint report -- Keeping the Promise of Community -- on the question of what should and what should not be considered community under the Medicaid Home and Community Based Services Waiver. The report, the result of a national summit of self-advocate leaders and a survey of self-advocates from a wide variety of different backgrounds and life experiences, talked about more than just the size of a setting. It discussed the importance of people with disabilities having the right to choose who to hire and who to fire among the staff members supporting them. It talked about the freedom to choose when to eat and sleep, who to live with and who to invite over and to be free of the rules and restrictions placed upon people with disabilities living in settings of all sizes. How is your agency doing in meeting this definition of community? Look through the report and consider if it may be time to ask yourself some tough questions.

Today, as the federal government takes up the question of how to define community living and the self-advocacy movement grows in strength, these issues are more relevant now than ever before. The disability rights movement faces new opportunities to drive meaningful change. That movement's rightful owners -- people with disabilities ourselves -- are organizing to take power after years of being relegated to the sidelines. We are once again entering a time of titanic struggle. History will record the choices we each make on the moral questions now facing us. When it does, how will you be remembered?