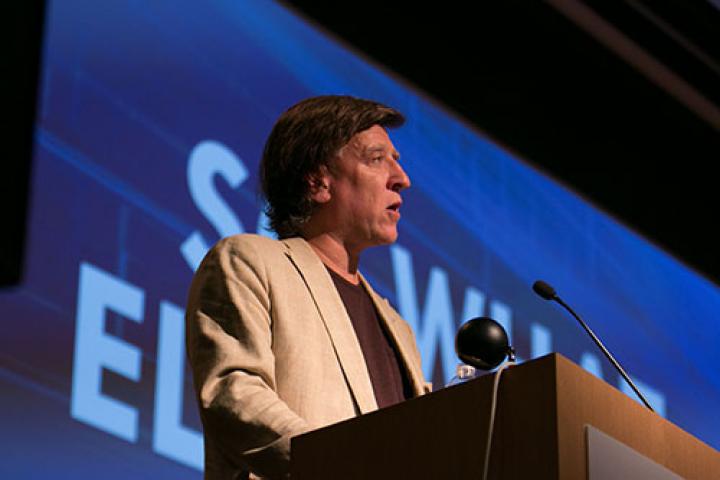 On July 25, YAI’s annual Leadership Summit drew 305 of the organization’s staff for a day of team building, professional development, and insight from a world-famous leadership coach. Held at the CUNY Graduate Center, event attendees had the opportunity to connect with colleagues as they learned more about the future of YAI and the changing field of intellectual and developmental disabilities (I/DD).

In addition to trainings, information sessions, and agency updates from YAI’s CEO George Contos, keynote speaker Tony Schwartz, New York Times best-selling author and founder and CEO of the Energy Project, kicked off the day’s activities with a lesson on how to stay motivated through challenging times at work.

“Time is a finite resource, but energy isn’t,” Schwartz said. “Energy is what defines our capacity to work, and it comes from four wellsprings in human beings: the body, emotions, mind, and spirit.”

Schwartz explained that, no matter how demanding our schedules, we can find small ways to renew ourselves and keep our energy reserves high. To demonstrate, he led the audience in a one-minute deep breathing exercise that helped lower blood pressure and clear the mind. The exercise illustrated that small practices from mini meditations to simply focusing on eating well and being present in life outside of work can have a positive affect that adds up over time.

“In everything we do, energy can be expanded and regularly renewed by establishing specific rituals — behaviors that are intentionally practiced and precisely scheduled — with the goal of making them unconscious and automatic as quickly as possible,” he said. “The higher our reserve of positive emotions, the more resilient we are in the face of challenges.”

Schwartz’s lessons come at a time when YAI staff must concentrate more energy than ever as the 62-year-old agency expands its operations to serve more people with I/DD throughout the region and beyond.

“Despite being recognized last year by Crain’s New York Business as the city’s 25th largest nonprofit, YAI remains one of New York’s best kept secrets,” Contos said during his opening address.  “By this time next year, our annual revenue will be almost $250 million dollars. Our workforce has grown to 482 new full-time positions, we’ve opened seven new residences — providing homes to 47 people — and we have either bought or leased 11 properties, which will result in residential placement for 87 additional people and day services for 30 more.”

Contos also highlighted growth throughout YAI’s network of agencies, including the introduction of the START crisis response model in California and the expansion of YAI’s affiliate schools, the International Academy of HOPE and Manhattan Star Academy, whose projected student populations have nearly doubled since YAI became sole member of both schools in 2019.

The news of YAI’s growth was accompanied by a series of information and training sessions designed to help staff understand what the agency’s expansion means for each program, how to adapt the organization’s human and technological resources to cope, and how staff can respond to increased media interest.

Contos noted that, even as YAI increases in size and visibility, the organization remains largely focused on the wellbeing of the direct support professionals, nursing, and other support staff whose work makes the organization so extraordinary.

“As long as we remain aligned with the common goal of being the best organization in the world supporting people with I/DD, we will succeed in every way that matters,” Contos said.