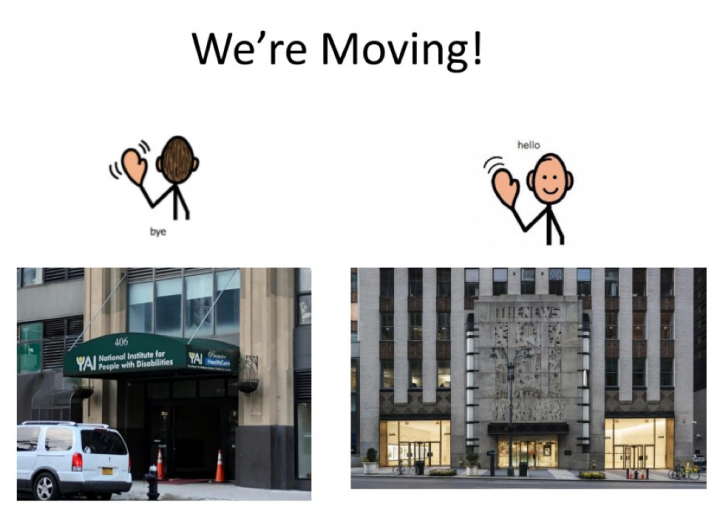 As YAI Headquarters prepares to relocate, staff at Premier HealthCare and YAI’s Center for Specialty Therapy (CST) are making sure that the people they support are equally prepared. The move, which facilitates YAI’s evolution into a more modern and agile organization, will take place over Labor Day weekend and will transition YAI’s administrative offices as well as the Manhattan offices for Premier and CST from Tenth Avenue to the East Side. All three will move to the historic News Building, an art deco gem that opened in 1930.

In anticipation of the move, treatment providers from Premier and CST have found a way to ease what can be a disorienting change for people with intellectual and developmental disabilities (I/DD).

“A lot of people who come here for services have been coming here for years and are very settled in their routines, so we expect some anxiety around a big move like this,” said Allison Valeriano, Supervisor of Occupational Therapy at Premier. “Some people we support have begun asking things like: ‘Will I still see the same doctor?” and ‘Where will I go for my appointments?’ To answer those questions, we’ve partnered with CST to develop social stories so they can know what to expect during the transition.”

According to Melissa McClung, a Speech Language Pathologist with CST, social stories are much like picture books in that they integrate words and visuals to provide people with I/DD a step-by-step overview of a future activity or change.

“People with I/DD — especially those on the autism spectrum — can be seriously disrupted by changes in routine, so they usually want to know exactly what to expect,” McClung said. “It’s one thing to tell someone with words, but those may not always be clearly understood or retained. By adding visual supports, we can paint a more complete picture, reducing stress and increasing the odds of a successful transition.”

McClung explained that each page of the social story has no more than one task or piece of easily digestible information that is accompanied by a visual. For instance, a simple message like “Walk through the door at YAI” might be shown over side-by-side photos of the current and new locations. By visually connecting both locations with the same activity, people can familiarize themselves with the new location weeks before the move.

While creating the social stories is a detailed and painstaking process by itself, the wide range of medical and therapeutic services provided by Premier and CST required a lot of coordination between the clinics to ensure that each story was tailored to reflect the unique treatment plan of every person supported.

“From the moment we had a firm date on the move, occupational and speech therapists at Premier and CST came together to make sure that we could work this transition into the daily routines of people we support,” Valeriano said. “Those teams have been great about finding the combination of language and photos to draw clear comparisons between the current and new location while reassuring people that their doctors and therapists would not change.”

In addition to reducing the stress associated with the move, social stories also facilitate peace of mind and enhance communication between people with I/DD and care providers.

“The best thing about social stories is that they make communication fairer,” McClung said. “Sometimes we take for granted that making plans and going through changes together is a big part of how we connect with one another. With these stories, we can help people who aren’t neurotypical bridge cognitive gaps and become true partners in that planning. That depth of connection is good for everyone.”

Both Premier HealthCare and YAI’s Center for Specialty Therapy will have a separate entrance at 227 East 41st Street. Visitors to YAI Headquarters can enter at 220 East 42nd Street.