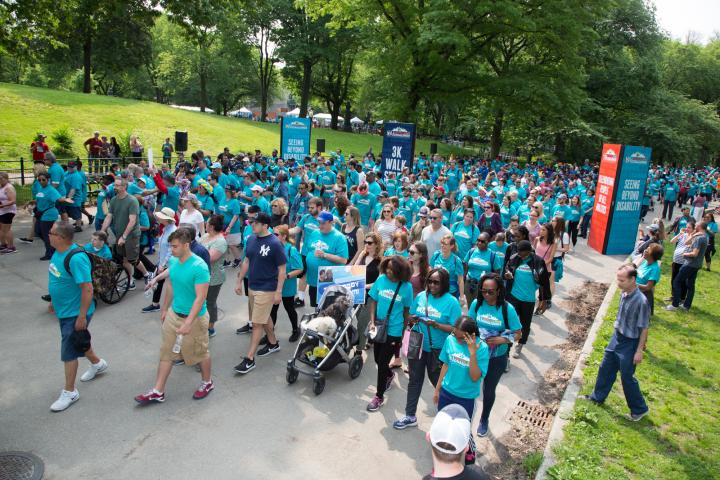 NEW YORK, June 3, 2019 – On Saturday morning, June 1, New York-based nonprofit YAI hosted its annual Central Park Challenge at the park’s Naumburg Bandshell. The event drew over 3,500 attendees and raised more than $450,000 to enrich services of people with intellectual and developmental disabilities (I/DD) while affirming their right to be seen as people, first.

The largest charity event of its kind in the state, the Central Park Challenge benefits more than 300 YAI programs that provide more than 20,000 people with autism, Down syndrome, cerebral palsy, and other types of I/DD in the New York metropolitan area with healthcare, housing, vocational training, and social enrichment.

Other highlights included disability-friendly magic tricks by SO Magic, a social skills-building puppetry performance by NYC Kids Project, and the energetic acrobatics of LGBTQ+ and ally cheerleaders from Cheer New York.

At the closing ceremony, Jimmy Tucker, who has received support from YAI since age 3, took the stage at the bandshell.

Tucker recounted his journey from a shy “guppy in an ocean” to a successful artist whose works have been featured at Sotheby’s and MoMA. The audience was visibly moved when he gifted one of his original paintings to ABC’s Bill Ritter, who has emceed the event for the last 20 years.

YAI’s CEO George Contos, reflected on the organization’s commitment to treating those with I/DD as people who deserve respect and not as conditions to be treated.

"YAI began the Central Park Challenge in 1985,” Contos said. “Today is our 34th year, but we remain as committed to a person-centric approach in 2019 as we were back then. That means every person we support, everyone on our staff, and everyone joining us here today recognizes how important it is for people to be able to make their voices heard about the kind of support they want, the environment in which they wish to live, and the types of relationships they want to build.”